Why Not Be the best?

I had very little knowledge about what the Marine Corps was about, and what exactly they did. I had no idea that they are considered the toughest military branch in America. I had no idea what I was getting myself into. It has to be partially the reason for how I am today.

My decision to join the Marine Corps was pure impulse. My oldest friend, Mike Pounds, joined right after we graduated High School. I did not think even once about joining any branch of military. I honestly thought Mike was a little ludicrous for joining the military.

Mike got back from boot camp sometime in October of 2008. He and I met up one day while he was home, and ended up stopping at Starbuck’s and talked for a little while. Sitting there in the café, Mike wearing freshly ironed green pants, polished black dress shoes, and a green wool knit sweater. He looked so professional and proud of the uniform that he was wearing. Then there was me in ragged jeans and a sweatshirt. I felt as if I shouldn’t be seen with him. I probably looked like an embarrassment.

Two hours had passed, and within those two hour, I decided that the next the day I was going to go talk with a recruiter and see what I had to do to so I could enlist in the United States Marine Corps. 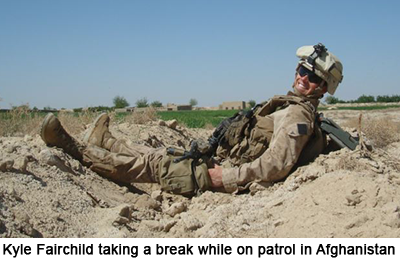 Four years have passed since I decided to join. I have been to Afghanistan, and had witnessed horrific scenes of people dying. My second and final deployment was a Marine Expeditionary Unit or MEU. I was stuck on a ship, the U.S.S. Mesa Verde for year, but got to see amazing sites, like the island of Crete, Greece; Africa, Spain, Italy. I saw more of the world in a year than some in a lifetime. However, the images from Afghanistan that I saw, still see, and will remain to see are imprinted in my mind for as long as I live. Because of those images and the effects that they took on me, I had to seek therapy for a short time while I was still in the Marines. I was in therapy from January until May when I left for my second deployment. I learned useful techniques to control anxiety, and anger. They ended up being extremely helpful.

October 22, 2012 was a very joyous day for me. I got off of active duty, and came back home to Ohio. It just so happens to be the same day I got my very first speeding ticket.

I moved back in with my parents. It was quite the adjustment to get used to. I started getting angry at small incidents again, but because I knew what to do I was able to control it a little more. The way my therapist told me to calm myself is, I would take deep, slow breathes until I felt calm. The human body can only physically feel one emotion at a time, so by taking deep breathes it slows down the heart, calming me down, and keeping me from being angry. I became really good at controlling my anger, and keeping it pushed back. It was like I had this incredible power, and it was an incredible feeling. I felt invincible.

A few months ago, I started thinking about why I was getting angry so easily, and I could never figure it out. I could never think of what had made me so mad. I started to get upset after getting mad. I was getting aggravated with how angry I would become, and how quick it would happen, and the fact that I couldn’t think of why I was angry just made me even more upset. I began thinking about my life prior to the Marine Corps, and comparing it to my life now. I rarely got angry before the Marine Corps, and when I did, it only lasted a few minutes at the most. With this new realization, it was apparent that the reason for all of my issues, that I have been struggling with, was caused by the Marine Corps. That’s when my new founded mindset started. My new outlook on the Marine Corps.

The anger continued, and I continued living with it, but something new happened. The anger started to become rarer, and shorter; however, getting upset afterwards continued, and grew into a depression. GREAT! Now I was fighting depression alongside anger. If I got angry over something, my whole day was ruined. The anger would leave just a quick as it came, but the depression lasted longer. Sometimes all day.

A month ago; however, I made the change to vegetarianism. Mainly because I was curious to see if I would enjoy it, and I do. Although, something else happened. I stopped getting angry. I was no longer having anger issues. Interesting? I thought so too. I was going strong, and while I was living my life as a vegetarian, I continued pondering as to my views on the Marine Corps, or the military in general.

Prior to the Marine Corps I had issues with killing. After all, it says in good book “Thou shall not kill.” I asked my preacher several questions throughout growing up, and my high school days. One question that really stands out, that I had completely forgotten until the other day, was “Is war a sin”? If we are not supposed to kill one another, why would war be alright?

That had to be it. I was apparently never a supporter of war or any form of violence. War. War was the reason for the issues I deal with now. My “PTSD attacks”. The acts of hate, and violence that I had witnessed had broken my spirit, and has caused me to have this inner struggle, that I did not even realize was going on. This battle inside is what makes me angry and depressed extremely too quickly. 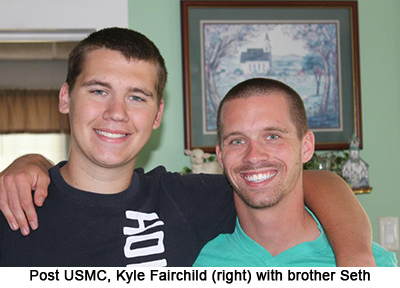 The battle I now struggle with is not just trying to better myself from PTSD, but figuring out exactly where I stand on supporting the troops. I know that peace will never exist. At least not in my life time, and I know that the only way to get across to some people is to take action. War really should be and is the final answer to solving disagreements across the globe. I don’t support the killing of people, whether friendly or foe. I just wish I held on to that belief a lot stronger before I enlisted.