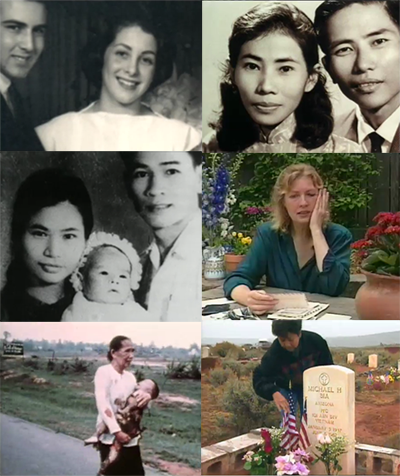 The following is an excerpt from: Regret to Inform Teaching Guide, by Barbara Sonneborn

“When my young husband and childhood sweetheart was killed in Vietnam on February 29. 1968, I did not know that his death not only destroyed our lives together but it would set me on a course of deep questioning and discovery.” 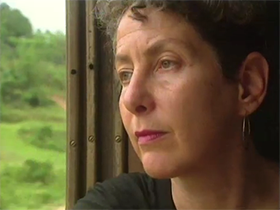 “It took me 20 years to begin the exploration that resulted in the film Regret to Inform. When I began writing in 1988, I knew that I wanted to look at war through the eyes of women, because almost everything I knew about war is through men’s experience – surely valid, but only one point of view. Most of what I learned about war when I was in school was the stories of significant battles. Everything I had been taught was from the American point of view. Everywhere I went in the United States and Vietnam, widows wanted to become a voice for peace, asking, ‘What can I do to help end war?’ In Vietnam, I heard again and again, ‘If people could just come here and see what war does, they’d never want to do it again.’ My hope in making Regret to Inform is that by understanding these women’s stories from both sides, viewers will begin to see that the enemy is war itself.”

Go here to visit the Regret to Inform website.

Please consider viewing the PBS Documentaries with a Point of View (POV) interview of Barbara Sonneborn and please consider reading these reviews of Regret to Inform:Roger Ebert and Stephen Holden, The New York Times.

Letters from Barbara to Jeff

"For twenty years I tried to push all thoughts of your death out of my mind. I did not read about Vietnam, neither articles nor books. I could not see the famous Vietnam films or the television specials. It's not that I didn't think of you. For a long time I could think of nothing else, feel nothing but the pain of your loss. We shared so much from the time I was 14 until my 24th birthday when I heard you were missing. But thinking of how you died—that was beyond me. It made me crazy with rage. Now finally, 20 years later, I want you to know what it was like for me, your widow, in those long days and months of 1968. And in the years since, how your death destroyed me, how I rose up from the rubble that had been my life, our life together, transformed, ultimately stronger, and with a better understanding of the value of life because of the pain I had to endure. I am ready to tell you what it was like for me to lose you so suddenly, so needlessly."

"I remember the night before you left for Vietnam. We were at the Hilton Hotel in San Francisco, eating at L'Orangerie, walking around, trying to be very jolly. You were so alive, so filled with life—how could you be any other way? How could you not come back? I just couldn't imagine it. You had to come back. I remember getting the news that you were missing and saying, "If there is a God, I'm praying for him to save you. I'll do anything. I'll believe for the rest of my life." I know I'm not the first one who's ever presented this deal to God, so it may have fallen on deaf or indifferent ears. But that you were dead was proof to me of all the existential reading, thinking, and talking into the night we had done in the years during college. Remember those last four lines we read again and again of that e.e. cummings poem?" Please go here for the whole story: Letters from Barbara to Jeff, Barbara Sonneborn, Widow Speak.