My brother sent me a link to a tremendous story about heroes, PBS, "History Detectives Help Return Soldiers Diary To Vietnamese Family". 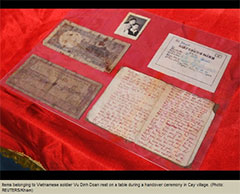 The story reminded me about asking our father what among all his WWII memories he felt most positive. He told the story of one night digging his foxhole and remembering a barn not too far away. He went alone to the barn looking for some straw to line his foxhole. He found some, slung his rifle on his back, and filled his arms with straw.

While leaving the barn, two German soldiers came up to him. They had their rifles ready. Dad thought he was dead. But the Germans had something else on their minds. Seeing him, they indicated they wanted to surrender. They couldn’t speak English and he couldn’t speak German. Dad gestured for them to follow him back to the American lines.

They all made it back to his unit. Dad must have convinced his buddies that the Germans were surrendering and not to shoot them. That’s what our father remembered as being most positive about his war… to this day I am so honored to have had Dad in my life. He was a hero in so many ways - like the men and women in the PBS History Detectives story.

Our Flag: A symbol of 200 Years of Religious Freedom

Established in 1809, North Springfield Presbyterian Church, Akron, Ohio, has honored members of its congregation who gave their lives in service to our nation in every conflict since the Revolutionary War. In 1972, Forrest R. Baker delivered these comments to the session of church where he was a long-time member of the congregation. Without notifying the church membership, the pastor had removed the U.S. flag from the church sanctuary where it had always been located. In the pastor’s mind the U.S. flag was a symbol of shame. Forrest, along with several other veterans, shared a differing opinion.

I want to say that the subject of the placement of the flag is the very last thing I would ever expect to be the reason for me to appear in front of this session.

I know the session has voted on this. I respect your opinion, and you have every right to it.

I also have an opinion.

When I walk into the sanctuary on Sunday morning, the very first thing that I observe is the large white cross up front, up high, as it should be. I know that the cross is a symbol of the Christianity through which we worship God. In my mind we worship God in this house and only God.

Then I look to the left, to floor level – the lowest level in the sanctuary – and see the symbol that represents the citizens of this country and of this congregation. I see the flag.

I respect the flag. I worship God. 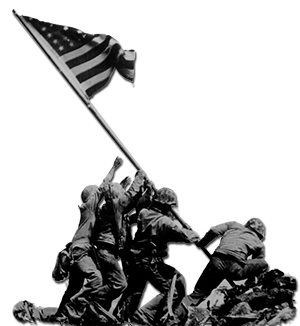 The citizens represented by this symbol around the world believe in freedom of religion, of speech, from want, and so on. They are known to many nations as a generous people.

I am sure God would approve of the generosity of the citizens represented by this flag. There is never a crisis anywhere in this world that the citizens of this nation would not help if asked to do so.

The members of this congregation give willingly to our missions to help people in need. These members of our church are also represented around the world by this flag as citizens of the United States, and must be protected by our embassy in these areas.

If the government of this nation is in anyway threatening the freedom of religion of its citizens, then I would be with you in removing the flag from a church property.

For the present, I believe the people represented by this flag have, through their actions over the past 200 years, made it possible for us to worship openly and freely and in whatever denomination we choose.

The flag is their symbol to respect.

The U.S. flag was returned to the church sanctuary.

A decorated combat veteran of World War II, Forrest R. Baker received the Bronze Star and Purple Heart while serving in the U.S. Army. He enlisted following Pearl Harbor and graduating from High School in 1942. He was a staff sergeant in the 3rd Army, 80th Infantry Division, 317th Regiment, K Company and participated in continuous combat, through several of the most fierce battles of the war, from the Normandy beaches through the Battle of the Bulge and into Germany, where he was wounded.

A member of North Springfield Presbyterian Church, Forrest served as assistant treasurer. He was also the long-time treasurer of Scout Troop 301, which was sponsored by the church. Forrest worked for the U.S. Postal service for 35 years, retiring in 1979. He passed on Dec. 23, 1994.

Jean Baker served several terms as a member of the Chruch Session and as a Deacon of the Chruch. A nurse, Jean spent her life helping others. She passed on Feb 12, 2003.

Go here for a PDF version of this article.